As published in National Pain Report

by Richard A. Lawhern, Ph.D. 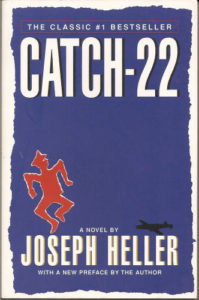 “Catch-22” is a phrase that most of us recognize. It refers to a satirical novel by Joseph Heller (and later a chilling movie) about flight crews operating from North Africa during World War II.  Casualty rates were so high among these fliers that some of them considered trying to be eliminated from duty on grounds of insanity.  But one of a long list of “catches” standing in their way was the idea that if you were sane enough to recognize the insanity of the war you were flying into, then you were sane enough to fly into it — even if you didn’t come home.

Pain patients can find themselves in the very center such dilemmas.

My most recent experience of Catch-22 began with a really good article in the November 2017 issue of Scientific American, “People Are Dying Because of Ignorance, Not Because of Opioids” by Dr Carl L. Hart, Chairman of the Department of Psychology at Columbia University. In this article, Dr Hart utterly demolishes the nonsense surrounding President Trump’s declaration of a national emergency in response to the widely hyped “opioid epidemic.” He demonstrates that addiction in America is neither a new condition nor a real epidemic. As he writes:

“The vast majority of opioid users do not become addicts. Users’ chances of becoming addicted increase if they are white, male, young, and unemployed, and if they have co-occurring psychiatric disorders. That is why it is critical to conduct a thorough assessment of patients entering treatment, paying particular attention to these factors rather than simply focusing on the unrealistic goal of eliminating opioids.”

I found Dr Hart’s paper to be profoundly on target.  So I looked him up online to send a note of appreciation (Scientific America doesn’t invite comments by non-subscribers.)  I congratulated him on a well reasoned and supported narrative.  I also suggested that he might lend his voice to forcing the US Centers for Disease Control to retract and rewrite their enormously destructive and ill-founded opioid prescription guidelines of 2016.

A Canadian friend of mine independently decided to add her voice in a similar comment to Dr. Hart. I won’t name her here, for reasons that will shortly become obvious. I describe her circumstances below, with her permission.

My friend is a chronic pain patient who recently learned that her doctor of nearly ten years is leaving the practice of pain management years earlier than he’d intended, saying he was “ANGRY” and had “had enough”.  Enough hounding by regulators, she has to assume he means. She’s now paralyzed with fear. Canadians are being deserted and abused in much the same manner as Americans, because of their version of our CDC prescription guidelines.  In Canada, enforcement of restrictive policy is managed by medical colleges rather than by Health Canada, but the result is the same: patients are being coerced to taper off pain medication they may have been on for decades, or outright discharged without medical support.

My friend has tried every pain management doctor nearby, as well as every family practitioner. (Most family doctors will no longer prescribe narcotics in any case; and other pain specialists are closing shop too. In the last two or three years, half the pain practices in her province have closed.) She’s also looked right across Canada; but no one will take her as a patient. She’s even looked in the U.S., where she has friends who are alarmed for her, and as far away as Europe. She has a lot of company among other frightened, desperate, and abandoned patients in her home town, and across Canada. Pain clinics are now flooded with new referrals, and most won’t consider patients who “simply” need their prescriptions renewed. Typical wait times to be seen at a Canadian pain clinic are at least two years and in most cases far longer.

Because she’s a thoughtful individual, my friend and her husband have discussed their situation and prospects in detail.  She has a plan for ending her own life, rather than allowing agonizing pain to overtake and disable her completely.  She is not “suicidal” in the usual sense that most doctors use the word. Her decision is rational, proportionate, and made necessary by the refusal of Canadian medical colleges to allow doctors to treat her. In essence, the colleges have chosen to make themselves agents of torture for hundreds of thousands of people whose only crime is that they hurt. The college in her province is one of the worst offenders.

Adding to the credibility and poignancy of my friend’s comments, she briefly described her situation to Dr. Hart in her letter.  And here’s where the Catch-22 came in.

An hour after she hit the “send” key, there was a thunderous knock at her front door.  When it was opened, she was greeted by two uniformed police officers who informed her that they were there to conduct a “wellness” visit.  Dr. Hart’s office administrator had contacted police concerning a potential suicide victim who might be “insane” (a word used by the officers.) In another hour of interview, they learned quite the contrary and went away shaking their heads. Her story is quite well known by friends and even by Canadian national media. She is by no stretch of imagination anything less than clear-headed and utterly sane. She is instead being persecuted and tortured by her own government—to which her college (like all the others) is accountable.

We cannot blame Dr Hart’s staff for doing anything wrong. They didn’t. Under US law, the doctor could be prosecuted for facilitating suicide and barred from professional practice as a psychologist, if his administrator had done anything less. This is the law in both countries. And it is yet another “Catch-22.” Our government is willing to unleash the DEA to drive pain management doctors out of practice by the dozen, but they’re not willing to wake up and smell the coffee on addiction and chronic pain, as ably portrayed by Dr Hart and many others.

The war on drugs and addiction is bogus and dangerous. It is a phony war directed to the wrong causes and punishing the wrong people. It punishes millions of people who use opioids responsibly for pain management, while avoiding the real needs — which are  intensive education against drug use in kids as early as Middle School, and community re-integration programs to provide present addicts with safe housing, employment training, Methadone or Suboxone maintenance, and extended access to regular counseling for both addiction and mental health issues.

Footnote:  the author does not advocate suicide in any sense as an “answer” to chronic pain. He merely understands the bind in which pain patients and their families increasingly find themselves.  He has supported pain patients for over 21 years as a non-physician healthcare writer, social media support group moderator and patient advocate.